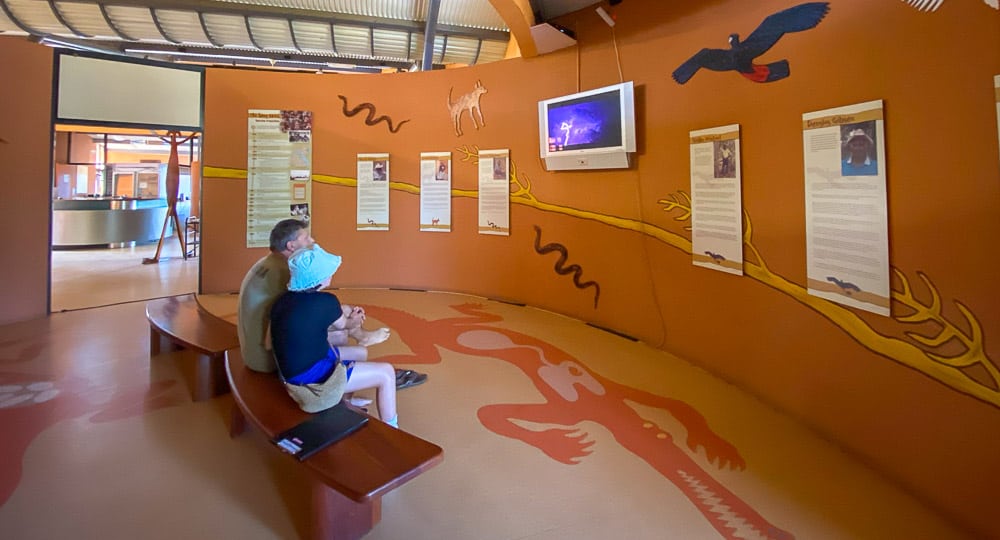 Laura, Queensland is a great little town, considered the gateway to Cape York given its the last bit of continuous sealed bitumen road.  It’s a small town, with only a few buildings, that you could easily drive right through it, however, if you can spare a day or two, it’s well worth stopping here.

Many people opt to spend a night in Laura before setting out on their Cape York adventure, however with some of the most significant Aboriginal art sites in the world, it’s highly recommended that you make time to explore the town.  In addition to its incredible Aboriginal rock art, there are some interesting sites to explore dating back to the Palmer River gold rush era of 1873.

If Laura is part of your itinerary on the way to Cape York, this guide will cover all you need to know about what to do while in town.  This guide also covers where to stay, where to eat and where you can get supplies such as groceries and fuel.

Are you planning a trip to Queensland? Have any questions? Join our Queensland Travel Planning Facebook group here now! It’s the perfect place to ask any questions and to be inspired!

Things to do in Laura (QLD) – Cape York

To help plan your trip to Laura, I’ve provided this handy map.  This map shows you where all the different things to see and do are located.  Zoom in and out for a better view.

Please note that information, including pricing, location and opening hours was correct at publishing and are subject to change at any time – I’ve prepared them just as a guide for planning your trip. 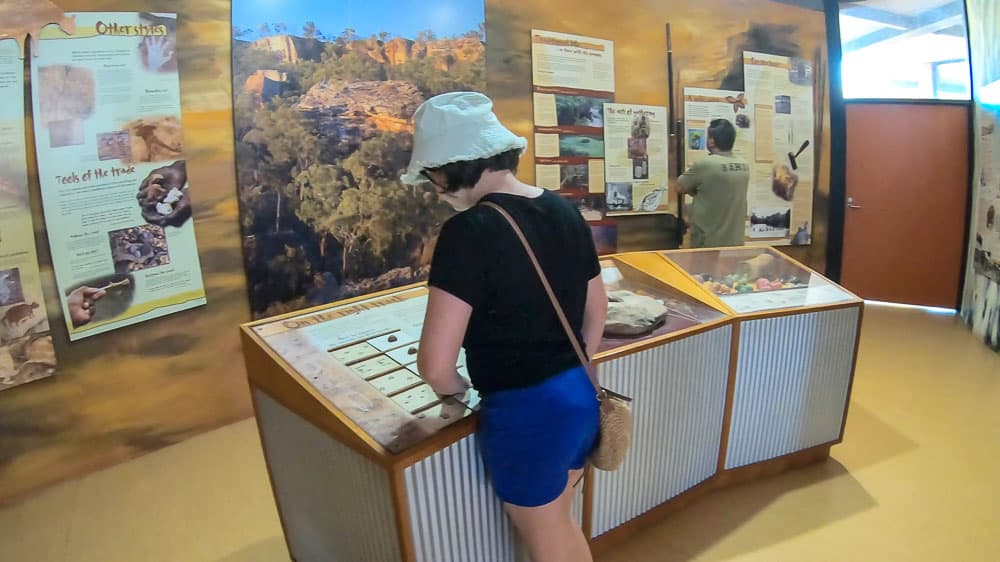 The best place to start your sightseeing in Laura is at the Quinkan Cultural Centre.  Here you will find a great introduction to not only Laura, but Cape York in general, as well as learn about the local Aboriginal people and their incredible rock art.

Start your visit to the Cultural Centre by sitting down and watching the documentary.  This documentary provides a great insight into the local landscape as well as both Aboriginal and non-Aboriginal heritage.

After watching the video, explore the various rooms within the centre and read the interesting interpretive displays.  There is a range of items on display including a few interactive exhibits that the kids will enjoy.  Here you’ll learn about things such as the first contact between Europeans and Aboriginal people, early Aboriginal life on the local stations, Aboriginal languages, bush tucker and the various rock art which can be found throughout Quinkan country.

Depending on the age of your kids, you could spend anywhere from an hour or so, to a few hours here.  Most of the displays are aimed at adults or older children, so do take something to entertain younger ones if you want to spend more time here.

There is also a small cafe and toilets at the cultural centre.

See our YouTube video here, which includes highlights from the Cultural Centre and Split Rock. 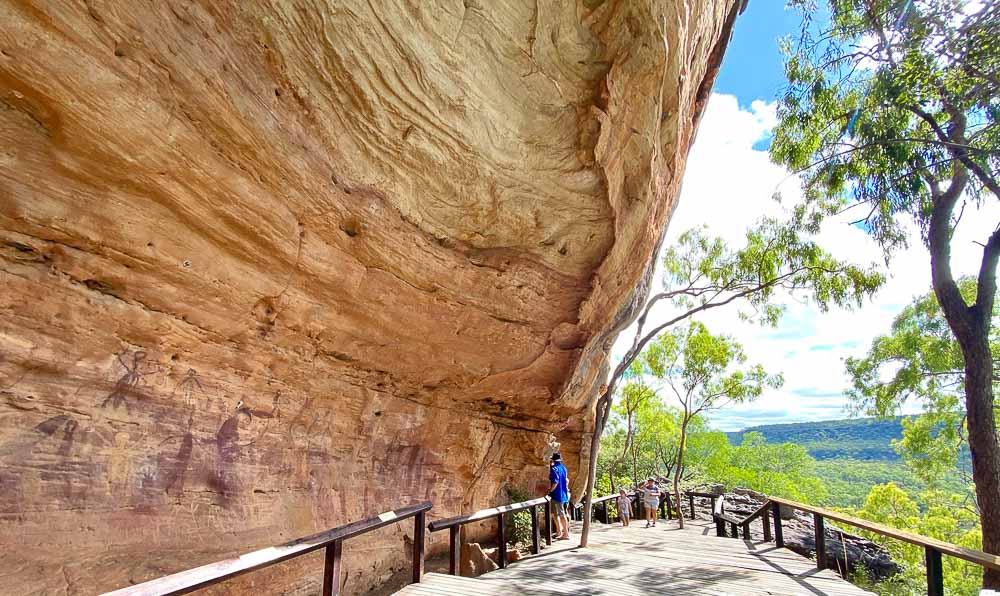 Today Laura is best known for its amazing Aboriginal rock art galleries.  The Quinkan rock art galleries are now listed by UNESCO as being amongst the top 10 rock art sites in the world.  While there are various sites around Laura where you can see the rock art, without a guide you’ll only be able to visit the Split Art Galleries.

To reach the art galleries you’ll need to take a short hike up a fairly steep hill.  If you can, wear enclosed shoes, although we all did it in thongs without too much drama.  It’s around 300 metres to the first and main site – Spilt Rock.  It’s then another 60 metres to the next site “Flying Fox” and then a further 40 metres to the final rock art site, “Tall Spirits”.

The area is famous for its mythical figures which are known as “Quinkans”.  “Quinkan” is the Aboriginal name for supernatural spirits that are said to live in the surrounding sandstone.  You’ll see these spirits pained throughout the rock art.  The paintings also include images of animals, plants, tools and humans.  Be sure to read the interpretive display boards near the car park, before commencing the hike to learn more about the Quinkans.

There are several more rock art sites in the area, however they are only accessible by tour.  If you’re interested in doing any of these tours, they can be booked at the Quinkan Cultural Centre.

Allow an hour or two to visit the Split Art Galleries.

Price: $30 per person, which is paid via an honesty system.

During the 1870s, Laura was an important supply centre for the gold rush towns, connecting the Palmer River Goldfields with Cooktown.  In the Mary Harris Memorial Park, which is in the main street of Laura, you can see a few old relics from this bygone era.

The park contains an old police lock up, the steps of the old railway station and an old traction engine.

Location: Terminus Street, across from the Peninsula Hotel 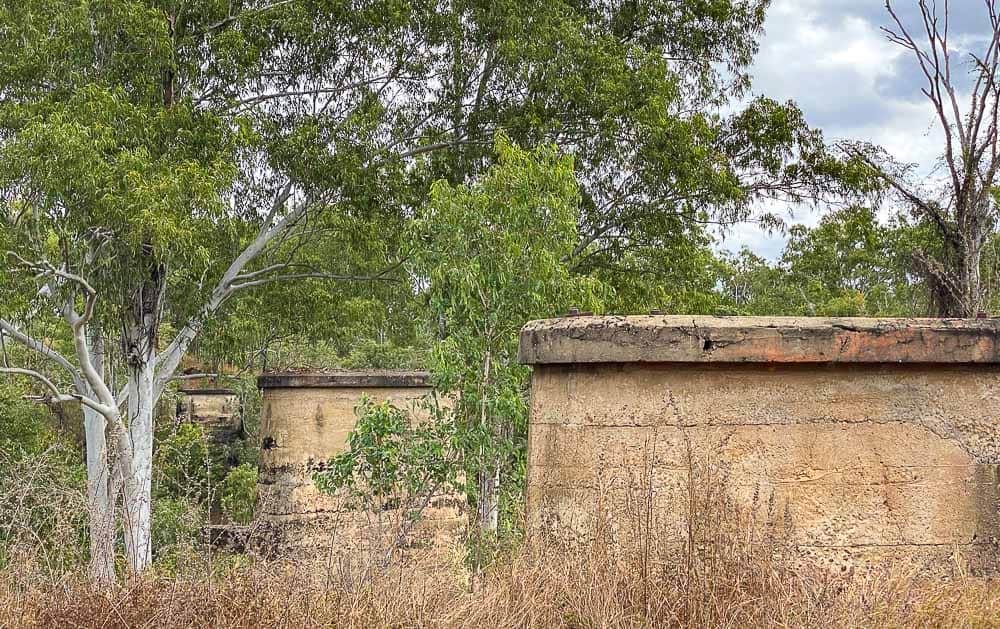 During the gold rush period, Laura was the terminus for the Cooktown and Laura Railway – which was a lifeline for the early settlers in the north.  The construction of the railway commenced in 1884, with the intention to go all the way to Maytown.  The railway reached Laura in 1888 and then a few years later there was a grand railway bridge that spanned the river.

However, by the time the railway reached Laura, the goldfields were in decline and the railway never reached Maytown as intended.  Nevertheless, trains did run between Cooktown and Laura for some 100 years.

While the railway is long gone, you can see what remains of the old railway bridge just out of town.

Location: Off Peninsula Development Road – turn right out of Terminus Street, and as soon as you go over the grid, take the immediate left track.  The track is rough and sandy and a 4WD is recommended. 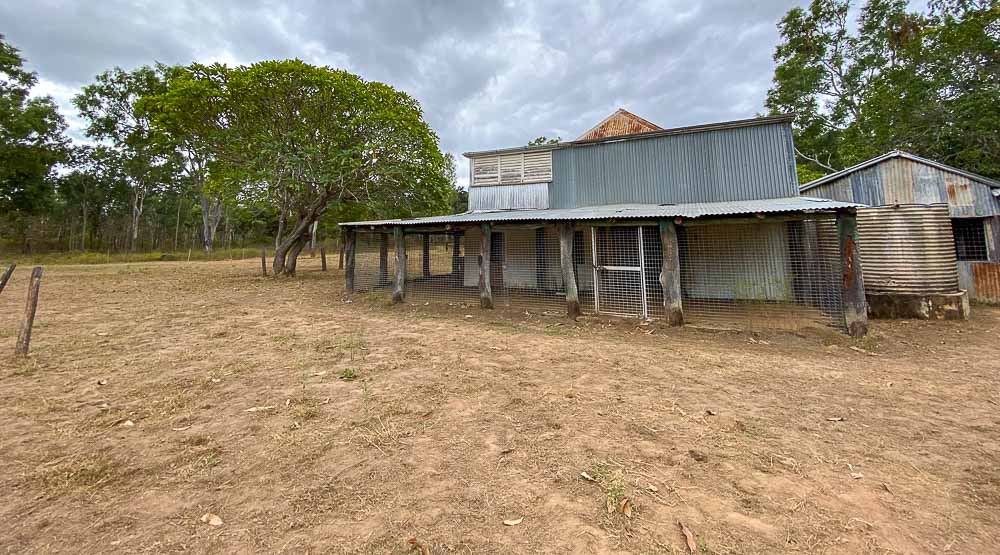 Put your vehicle into 4WD and head out along the red dusty road to visit the Old Laura Homestead, around a 30 minute drive outside of town.  The area known as “Old Laura” has a rich pastoral history dating back to the 1880s.  This area was used for grazing and breeding cattle, with the Old Laura homestead being one of the largest.

This old homestead first belonged to Fergus O’Beirne, a young Irish immigrant who purchased the station in 1879 for around £8.  At its peak, Fergus had over 8000 head of cattle on the property.  The property was then sold to Patrick Bernard and David Grogan in 1925, and then the Lakefield Cattle Company in 1966.

Soon after 1966, the homestead was abandoned and fell into disrepair.  Then in 1978, the Queensland Government purchased the homestead and in 1986 began to restore it to its former glory.

Today you can visit the old homestead and wander around the property, exploring the several buildings on site.  The oldest parts of the buildings that remain today date back to 1892.  Within the homestead is a range of old photographs on display and interpretive boards providing further information.

Location: From Terminus Street, turn right into the Peninsula Development Road, then turn right into Endeavour Battlecamp Road.  From there keep driving until you reach the signs – it is well signposted, although there are no signs for some time. 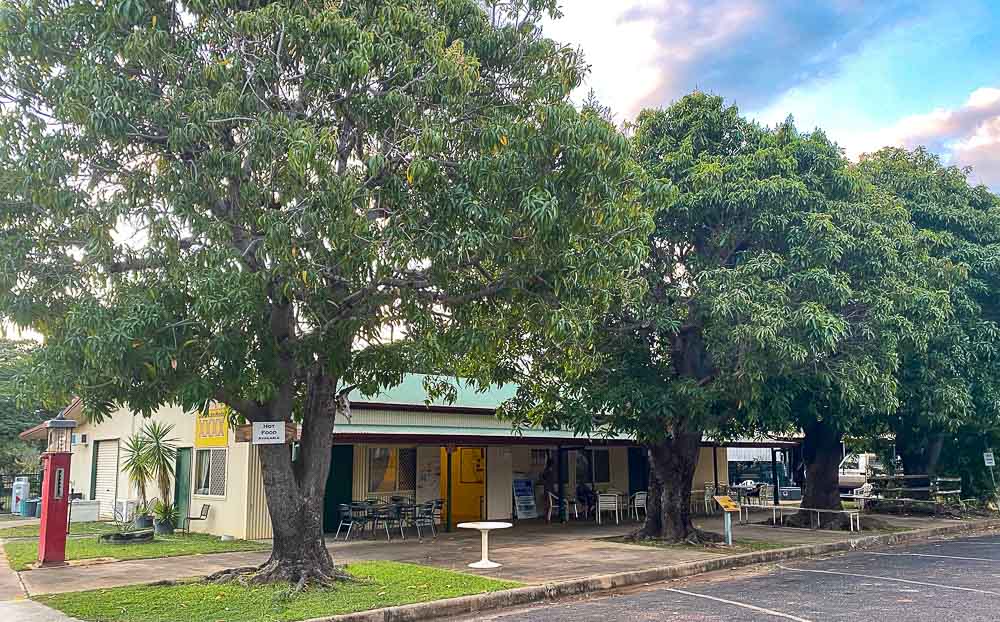 The Peninsula Hotel is the only pub in town where you can get yourself a hot meal and cold drink.  The hotel is on the same site as where Laura’s very first hotel was, which was built in the mid 1880s.  Back then the hotel was mainly frequented by miners from the goldfields and stockmen from the cattle yards.

Unfortunately, the old hotel was burned down in 2002 and has since been re built to what it is today. 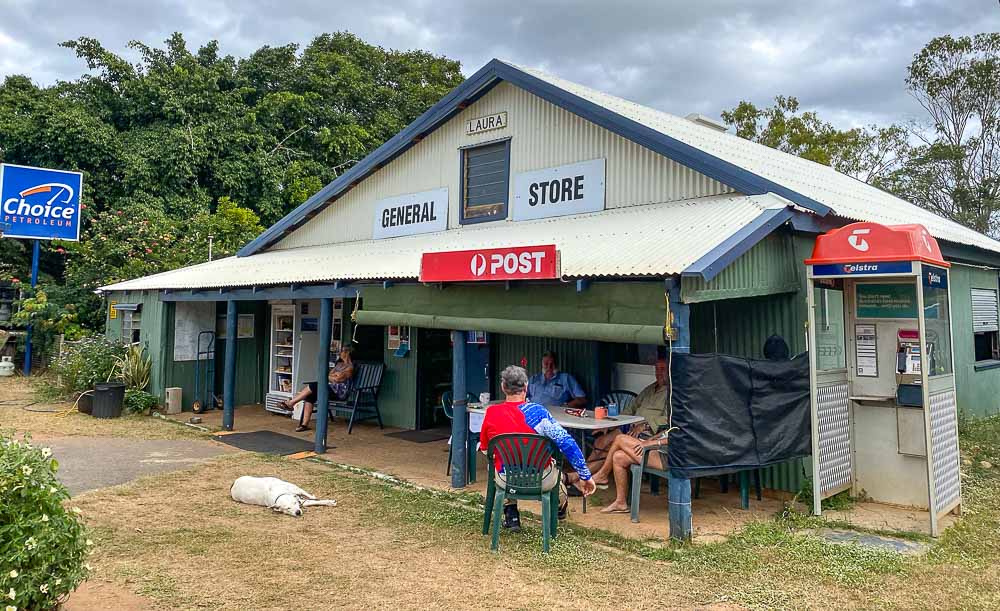 The Laura General Store is the place to go in town for your basic grocery supplies, as well as to fill up on fuel.  However what is even more interesting is the old Austin 7 they have on display outside.  Believe it or not, this is the exact model of the very first car that made its way to the very tip of Cape York.

Where to Stay in Laura – Cape York 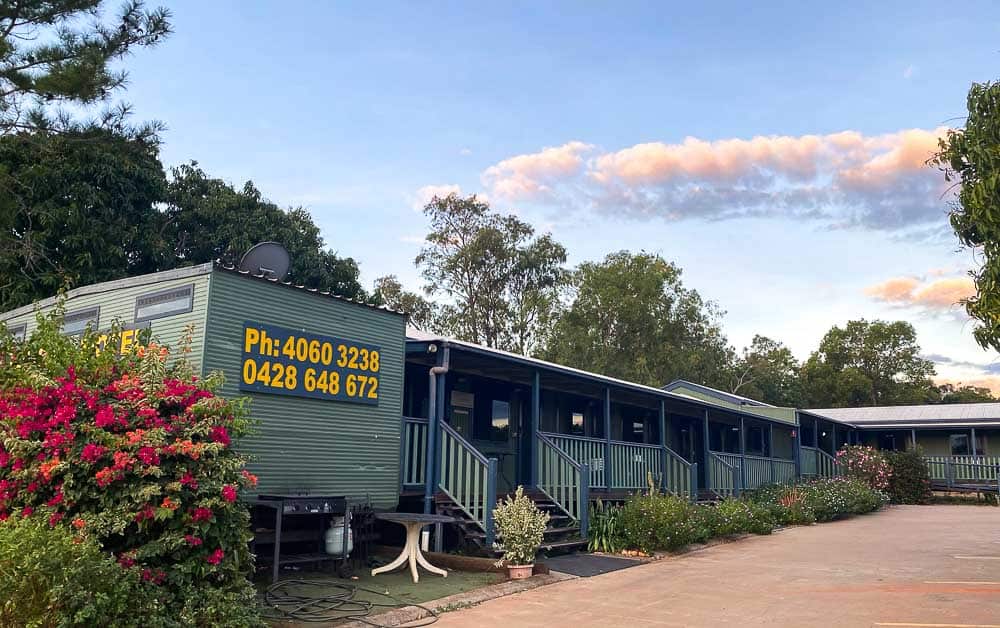 Most people tend to camp while visiting Laura at either Ang-Gnarra Caravan Park or behind the Peninsular Hotel.  However for those families not camping, there is accommodation at the Laura Motel.  The Laura Motel offers great family rooms, able to accommodate up to four people.

Click here for more information about where to stay while visiting Laura.

Hopefully you found this guide to all the things to do in Laura helpful.  You can read more of our Cape York content here, with guides to places such as the Weipa and the very Tip of Cape York here.